Fearless: A. Bartlett Giamatti and the Battle for Fairness in America 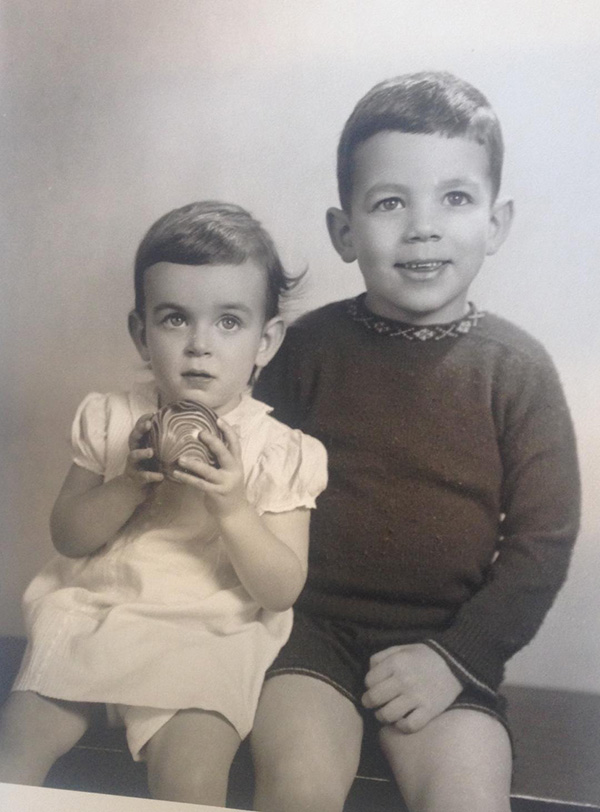 A.Bartlett Giamatti’s life, how he formed his values, and the principles he lived by—as parent, teacher, president of Yale, and commissioner of Baseball—emerge powerfully in Fearless, A. Bartlett Giamatti and the Battle for Fairness in America. To understand him, you need to understand his parents, especially the discrimination endured by his New Haven born father, his grandparents on both sides, especially his father’s southern Italian immigrant parents, and how Bart came to fully define, embrace, and battle for “fairness.”

Based on more than six years of interviews and thorough, often revelatory documentation not previously disclosed by Yale historians, Pulitzer Prize winning reporter, Nick Kotz, concluded that in Fearless, “Proto writes with the candor, directness, thoroughness, and passionate pursuit of truth that also characterized Giamatti.” Congresswoman Rosa DeLauro focused on the deliberate destruction and forced relocation of Italian and Jewish immigrant and African American families to serve Yale’s purpose that Giamatti witnessed as a student: “Neighborhoods destroyed. Families displaced. Sterilization justified.” Giamatti declared his own civic and moral imperative to do battle: “Rest,” he wrote, “will come by never resting.” 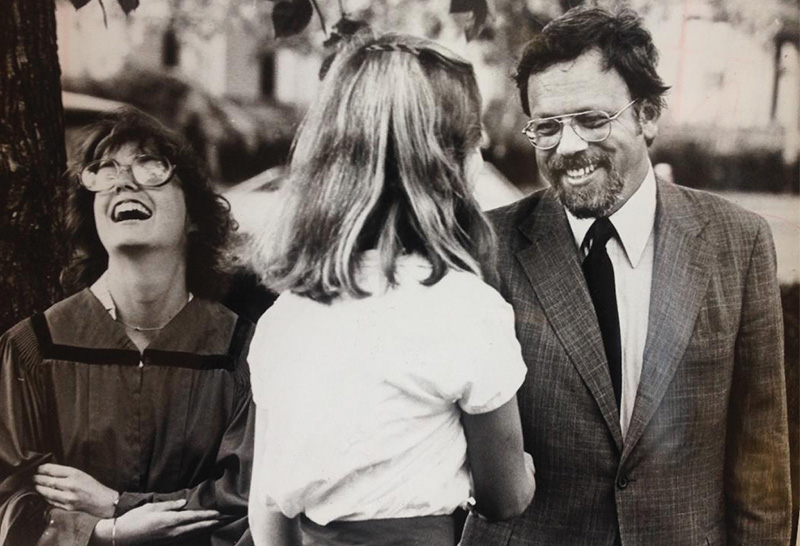 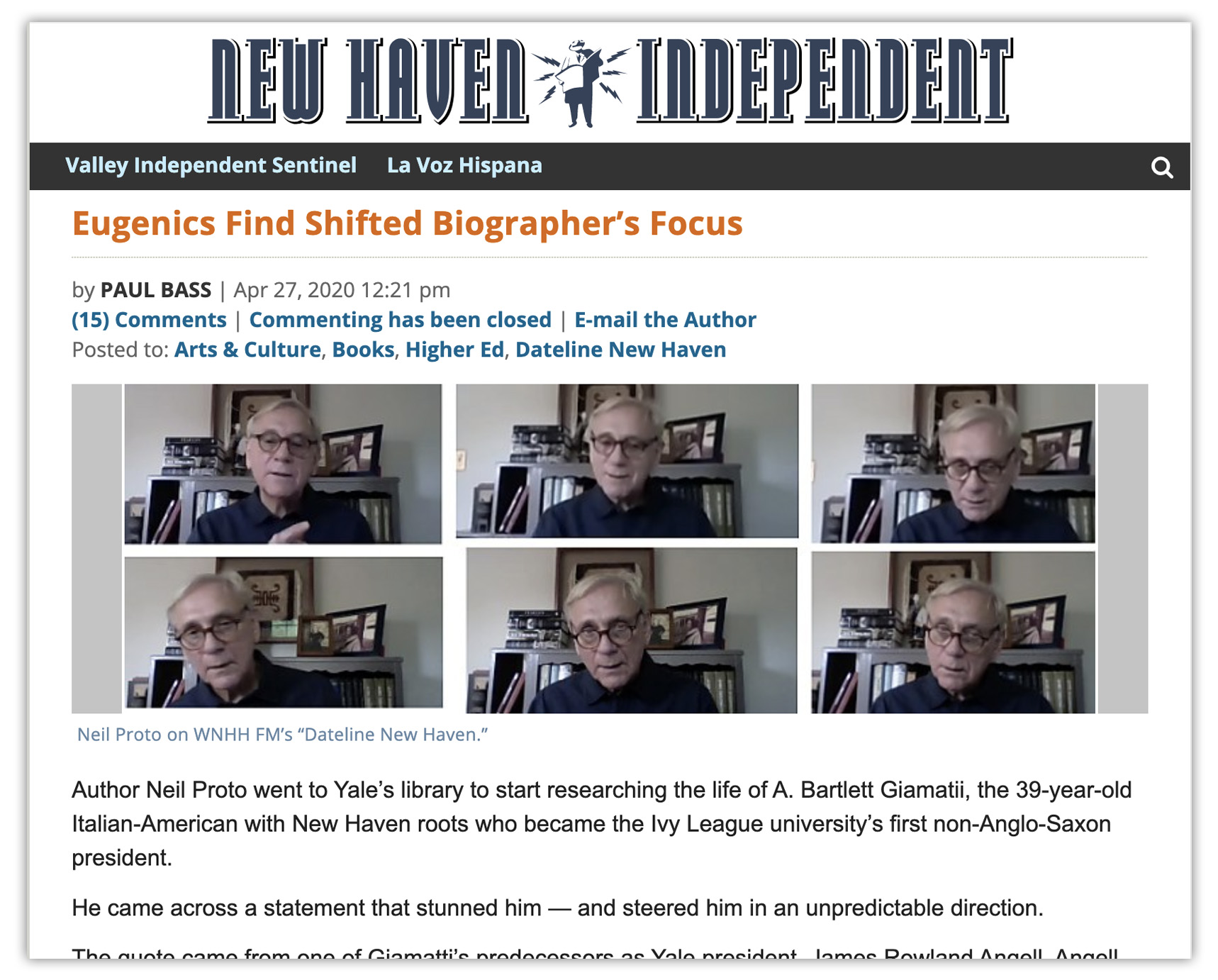 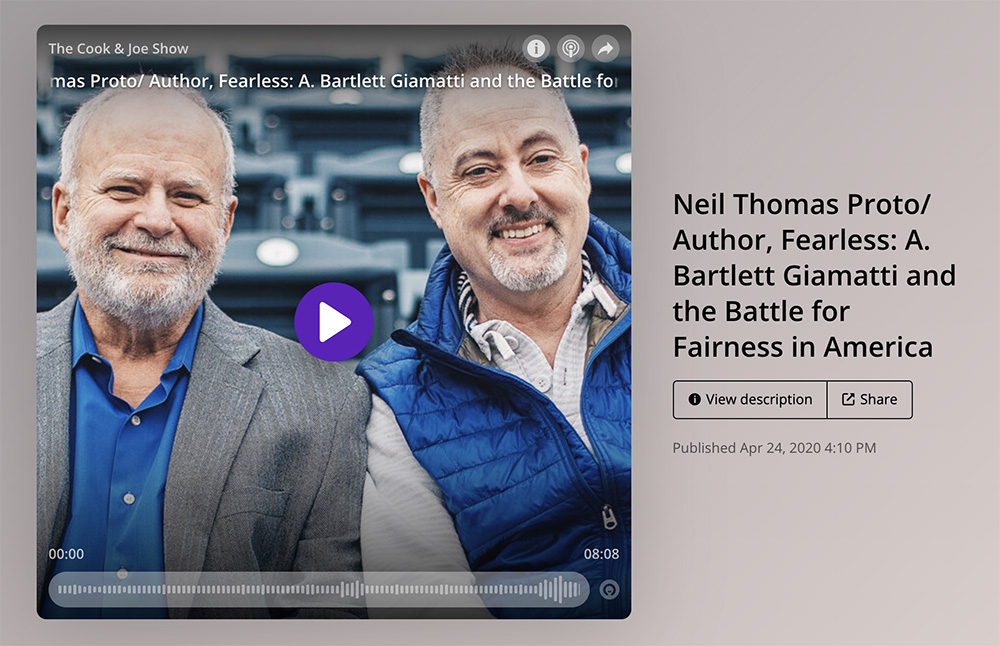 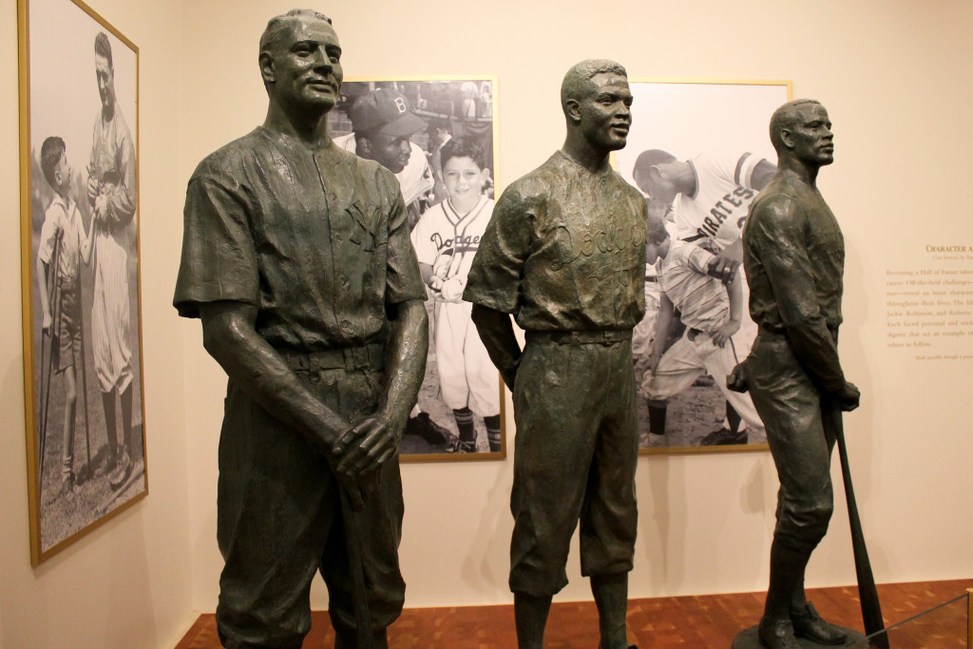 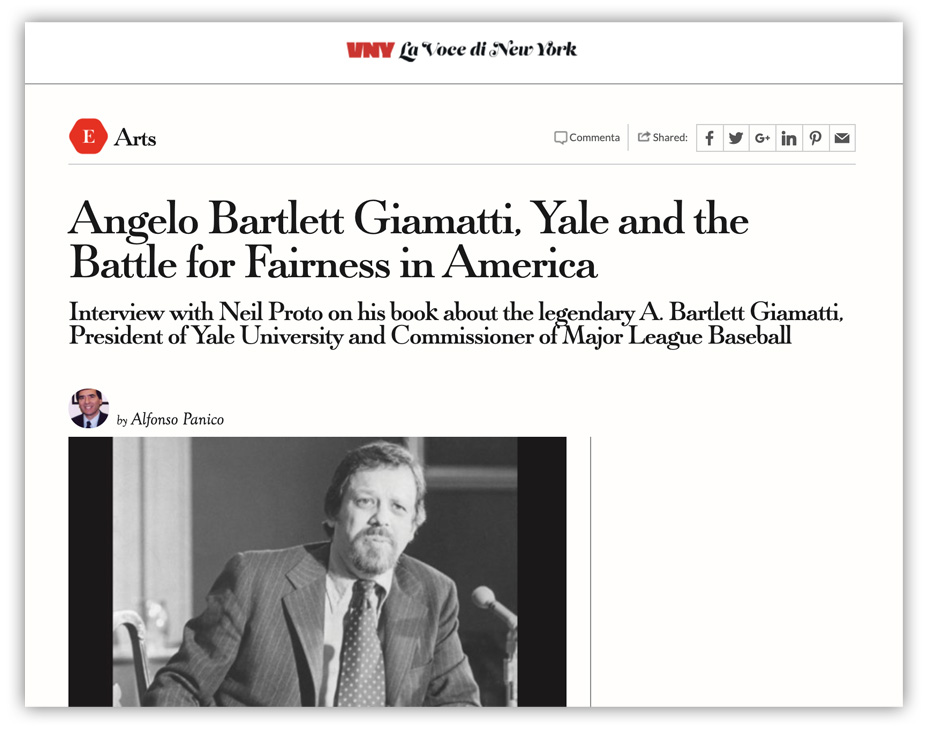 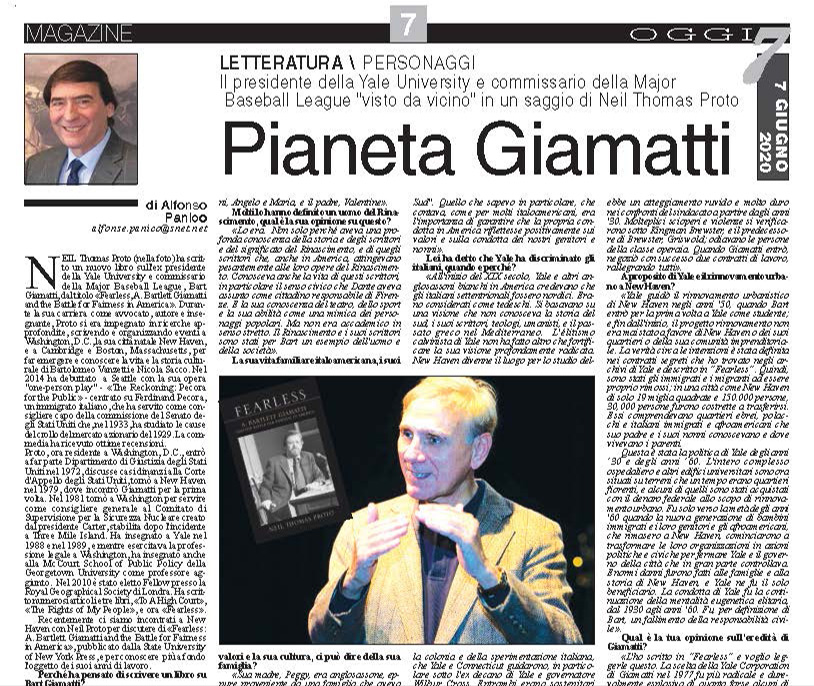 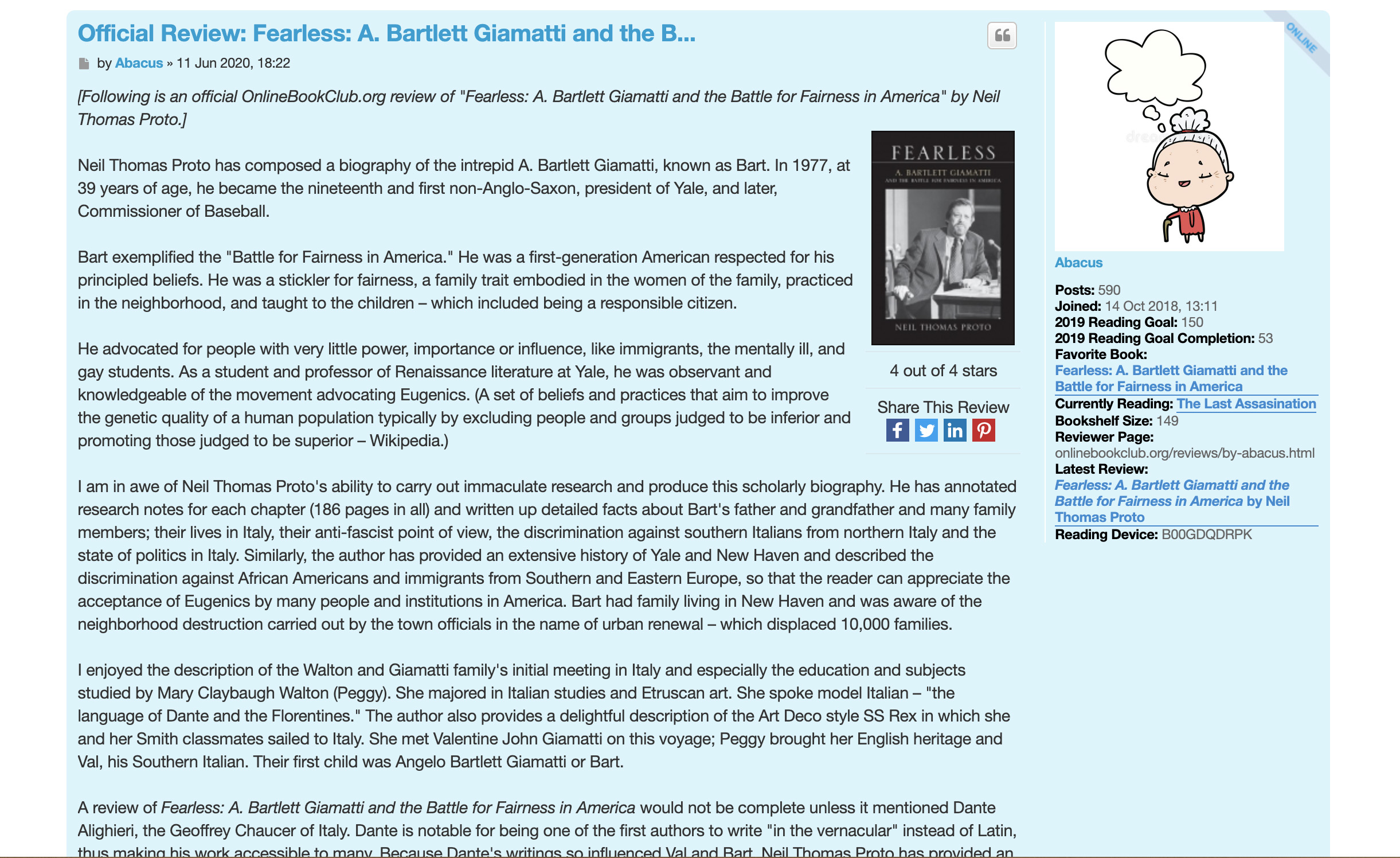 
An official Review from OnlineBookClub.org 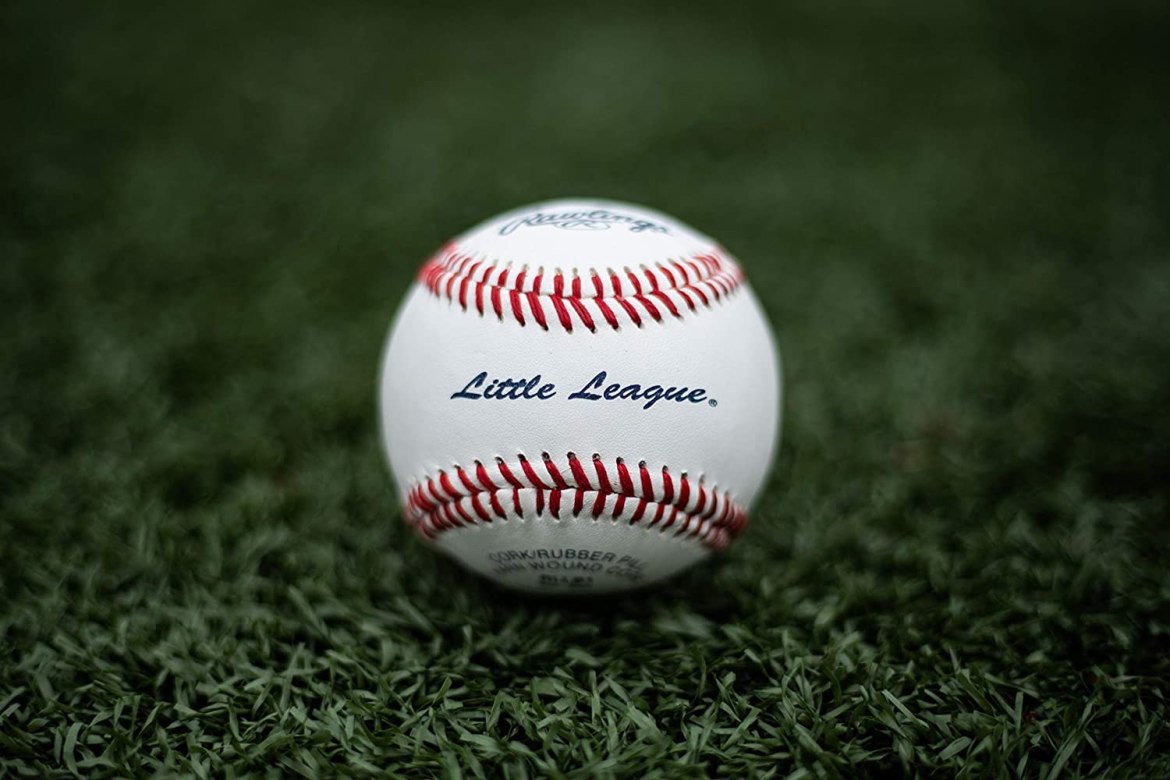 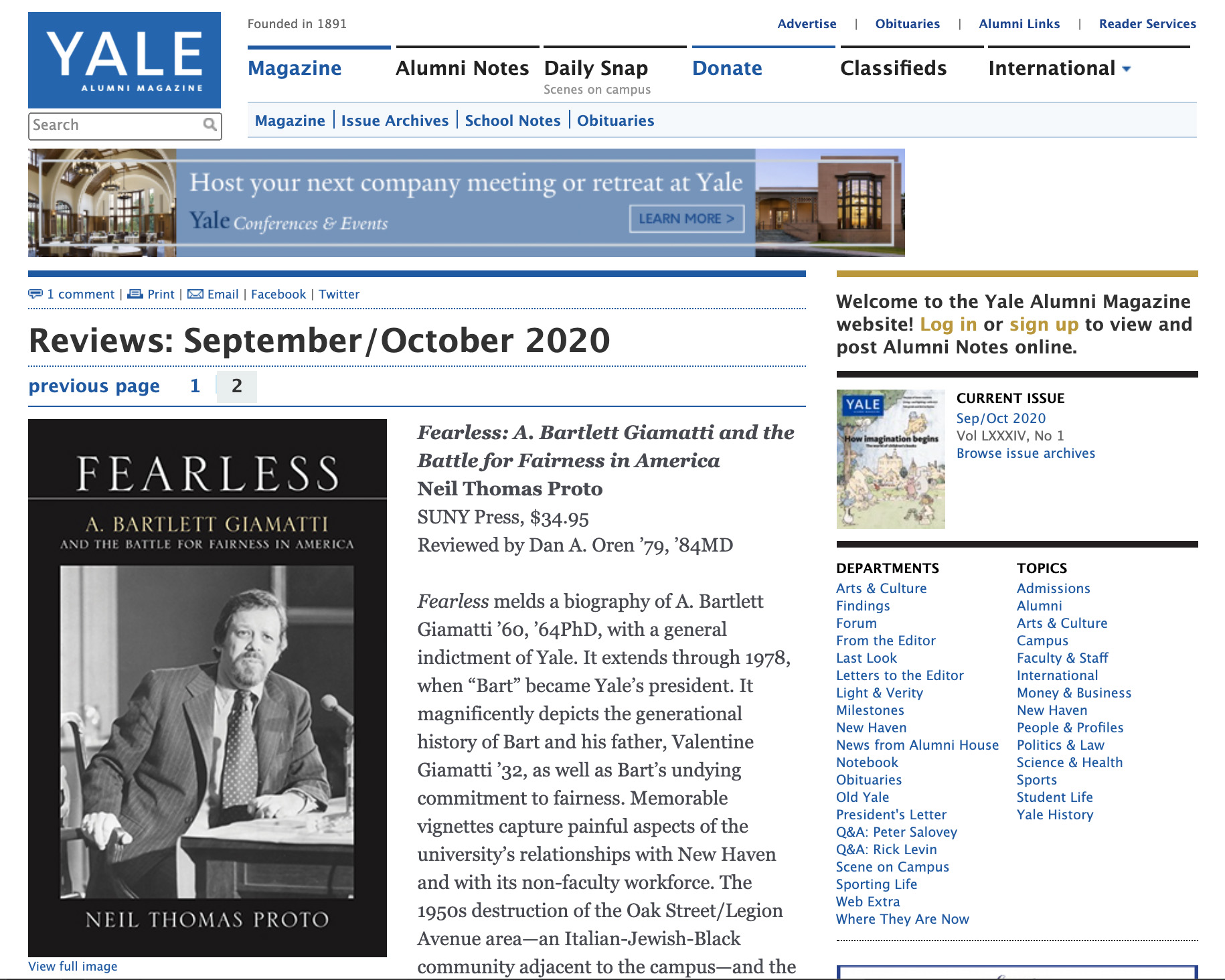 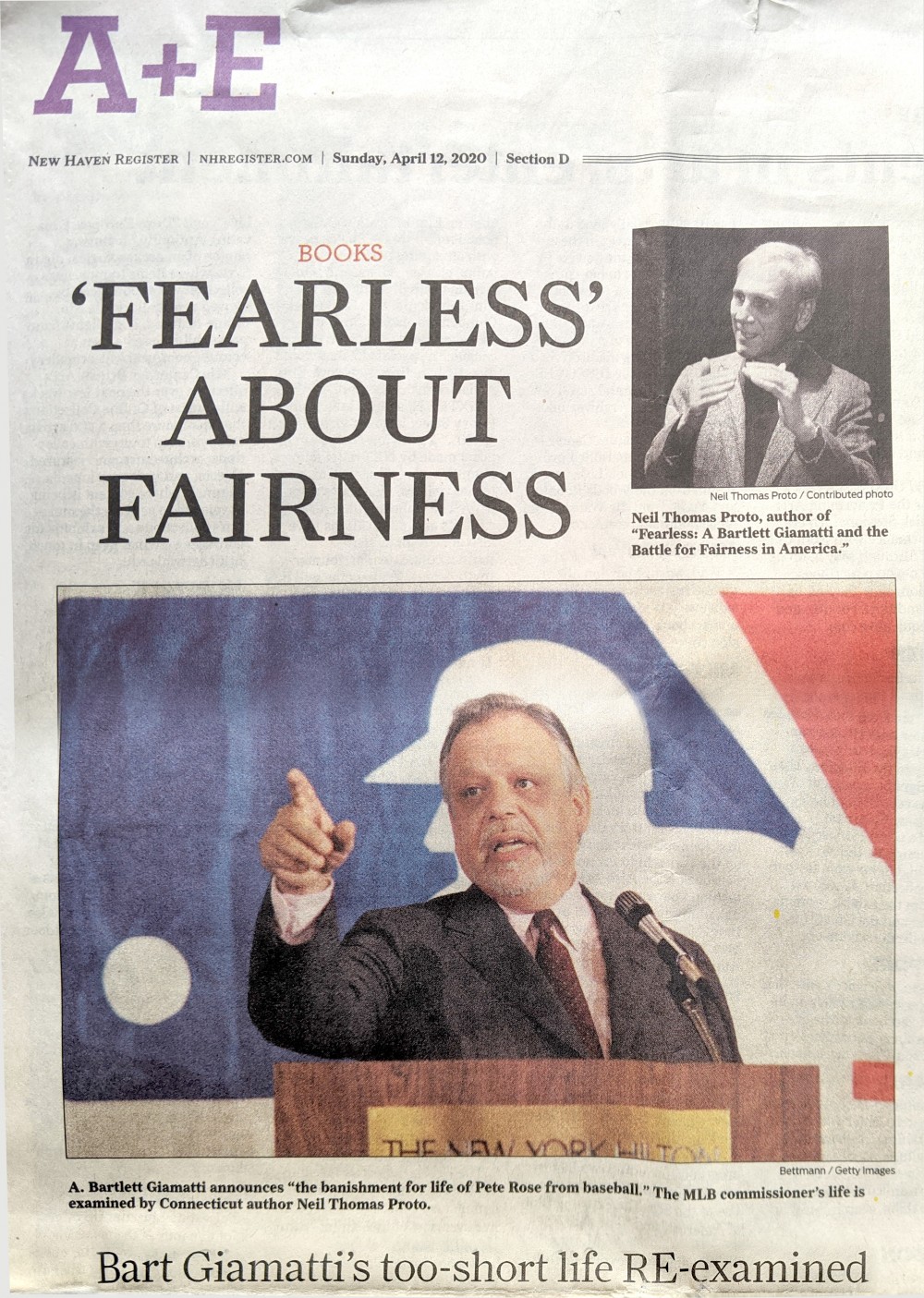 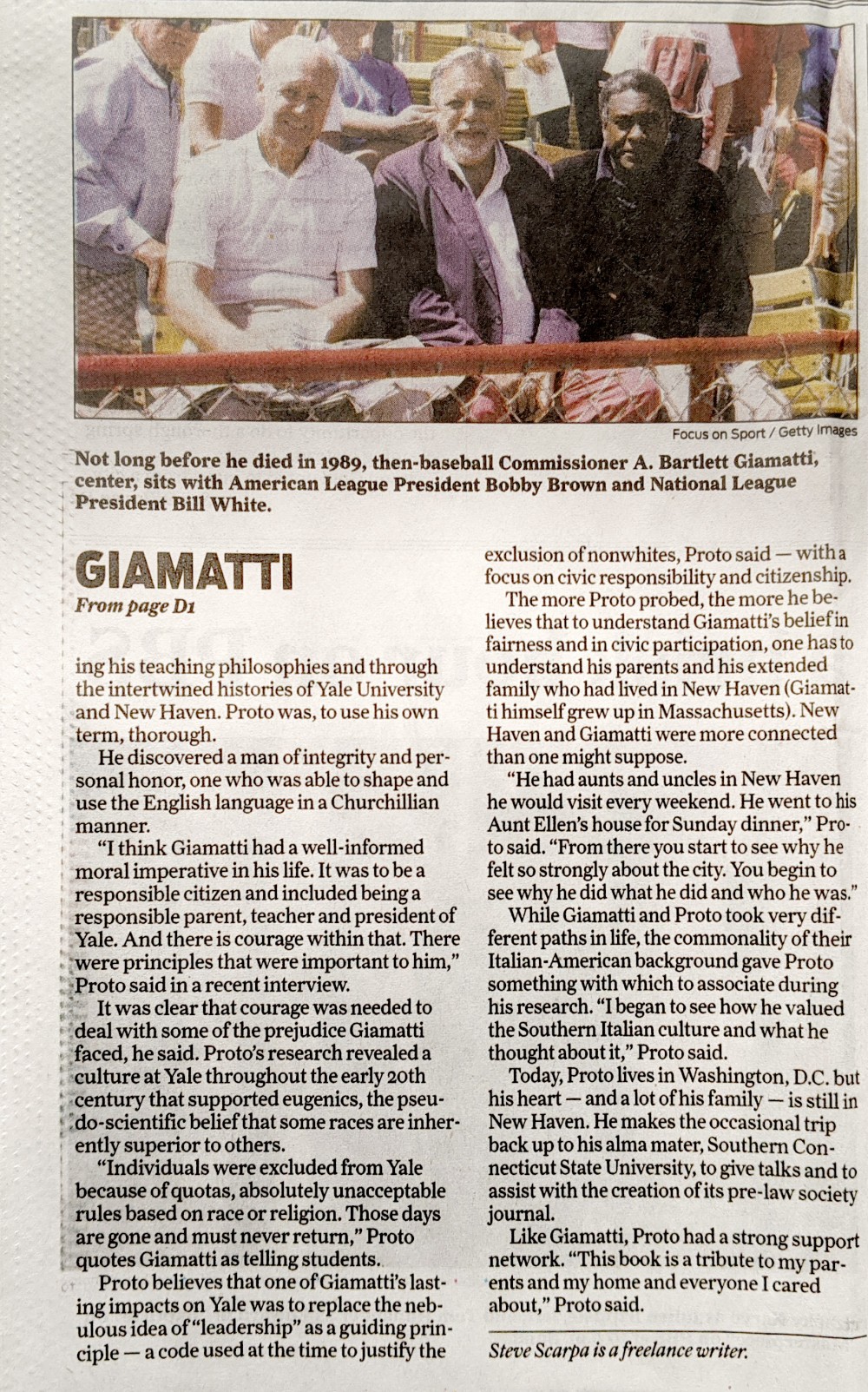 New Haven and Yale: Giamatti and DiLieto: A historic moment? Or a model? 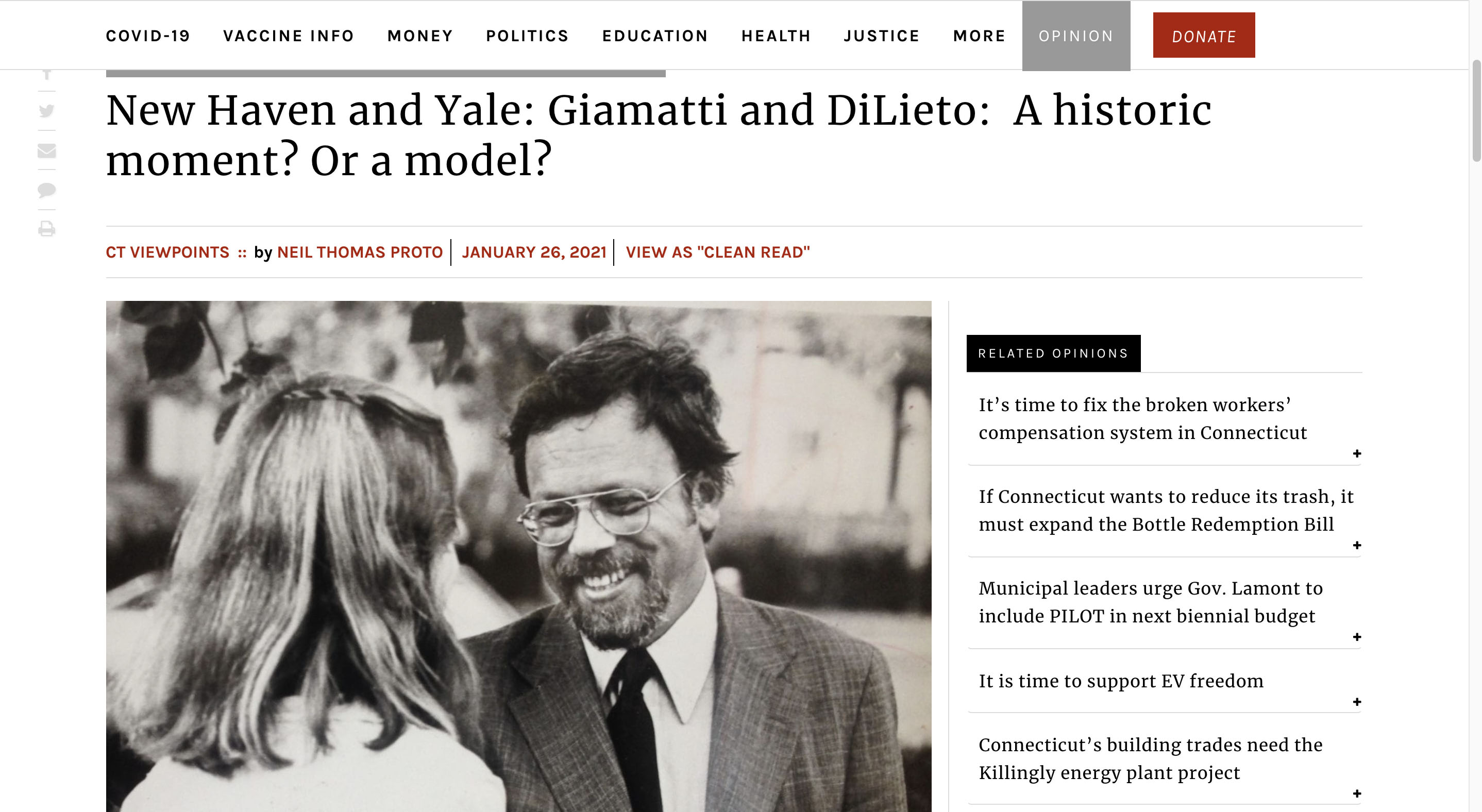 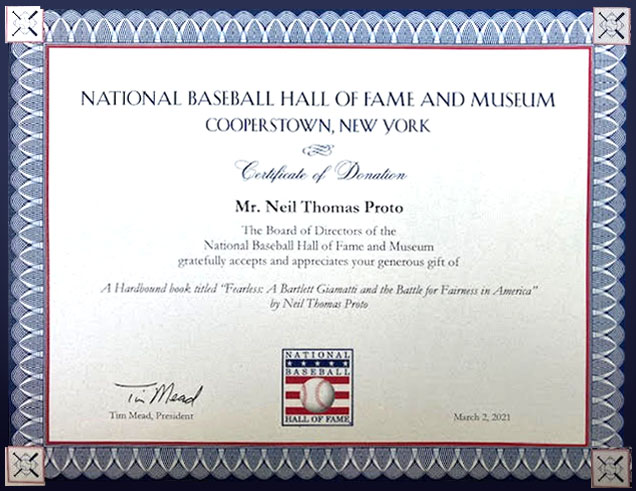 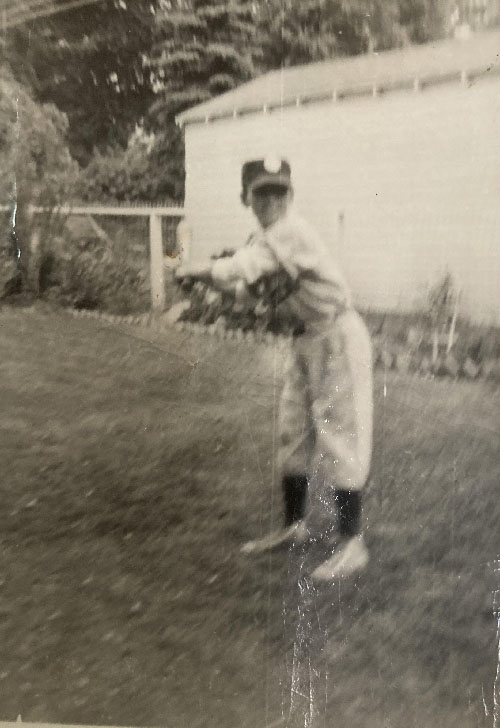 
Click here to hear Neil speak on the award

Transcript:
In the years it took to research and write Fearless, I visited the Hall of Fame’s Giamatti library and had periodic, wonderfully fruitful exchanges with various people within it. They each give special life and daily respect to the national treasure they preserve, build, and curate. Their tone and the way they execute their purpose always rang loudest and lovingly of family and memories, especially my own in the Little League, in New Haven, and the place of my parents and neighbors and the volunteer coaches, and the values of fairness and caring they each sought to encourage. This certificate they sent me, a thoughtful display of gratitude for a donation that, I hoped, likely touched them deeply, brought me profoundly into those memories and values that still endure, in me and at the Hall of Fame. There are awards in books that are affirming about your work, and then there are the unexpected ‘awards’ in life that matter deeply and permanently. This simple form of recognition was among them.

Neil Proto: A conversation with the author of Fearless (April 26, 2021 at SCSU)

Fearless was chosen for the Bronze Award in Biography by Foreward Reviews (“dedicated to the ‘art’ of book reviewing”). Fearless also was chosen as a finalist in Autobiography/Biography by The Next Generation Indie Book Awards, the largest International awards program for indie authors and independent publishers established to recognize and honor the most exceptional independently published books (announced on Facebook, June 25, 2021). Below is the interview of Neil by Foreward Review Executive Editor Matthew Sutherland, published on June 22, 2021, with this prefatory observation by Matthew: “The short list of great Americans of the 20th century would be incomplete without the extraordinary A.Bartlett Giamatti.” 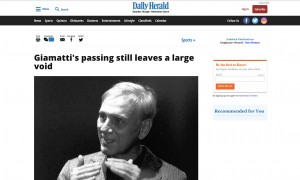 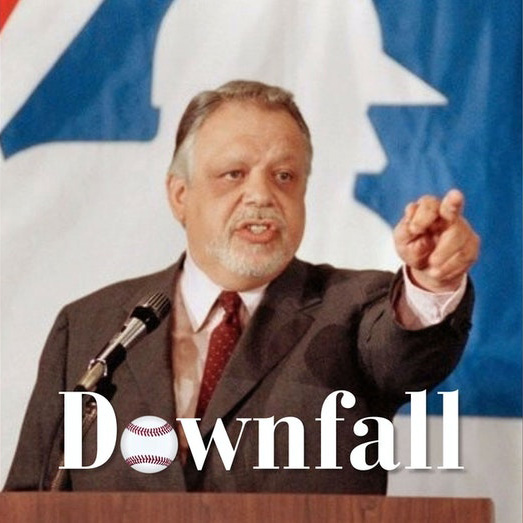 Episode 1: The Threat and the Strategy

Episode 2: Baseball’s Public Trust and the Battle for the Game