Proto: “I wanted to be a high school history teacher and couldn’t get into the program at Southern Connecticut. Ninety-percent of the graduating class wanted to be teachers. That seeming failure opened up a larger world and I leapt into it and never left. Liberal arts and student government; teachers with worldly experiences and broad notions in their heads; and students with intense commitments to learning and principled views who were encouraged — the teacher as mentor, as parent — to get more formal education. But the desire to teach never left. Or the importance of being the mentor.”

Proto: “My sister was the educator in our family. Diana, a brilliant teacher, a national Milken award winner, innovative in the classroom, a model for public school education, which I, too, was the product of until I left for graduate school in DC. She was especially helpful when the graduate level course at Georgetown I was teaching got larger and I was searching for new techniques to ensure more intimate, engaging educational experiences beyond rearranging classroom chairs, one-on-one discussions, and having students form team debates. It was a wonderful and demanding teaching experience; rated highly by students as well.”

Proto: “The courses were deliberately interdisciplinary and as real and human as I could make them. Looking, for example, at coal’s use through the harshness of mining, using ‘Harlan County, USA’ and the writings of Harry Caudill and how I wrote about coal and railroads in ‘High Court.’ Visits to nuclear power plants when I taught at Yale and the first time at Georgetown. Or integrating into the urban readings ‘The Beats’, ‘Route 66,’ ‘Blackboard Jungle,’ ‘Rebel Without a Cause,’ and Thorstein Veblen. Provoking the family perspective in policy choices, and delving deeper into the life of Dorothy Day, Jane Jacobs, and Michael Harrington. Using the evolution of jazz, and literary works that described urban settings, like Dreiser’s ‘Sister Carrie,’ as preludes to understanding the evolution of Chicago and how it looks and feels. Student papers had to include interviews, drawings, site visits, and law, a comfort with not deferring to lawyers but being able to engage them.”

Proto: “My brother, Richard. A remarkable mathematician and public servant to the nation, was a serious thinker throughout his life. His death in 2008 was an unexpected loss, especially my anticipation of moments of recollection as we grew older. Fortunately, with my sister Diana, we already had done much of that including three visits to Italy together. Early in my life he encouraged me to think about history differently. He made it alive and current no matter the era. There were, of course, other influences and experiences that affirmed that. I write it and teach it that way, trying to make the reader be there or the students meld public and private realities and values into classroom learning.”

Proto: “In 1976, I gave the commencement address at my college alma mater. In 1994, I was gratified to receive commendation from my grammar school. On my mind in both places was the mentor, the teacher as mentor and friend. I remembered and praised them by name and the difference they made in choices made, ideas explored, and giving reality to possibilities, attainable — sometimes by indirection or non-linearly — with persistence and hard work and recognizing opportunities when they emerged. I did it in inner city summer programs during New Haven’s urban riots, as a dorm director, a teacher, a lawyer in private practice, as chair of Wilton Park, and my early involvement in the Roosevelt Institution, finding it mutual and gratifying, developing friendships over time, learning from it.” 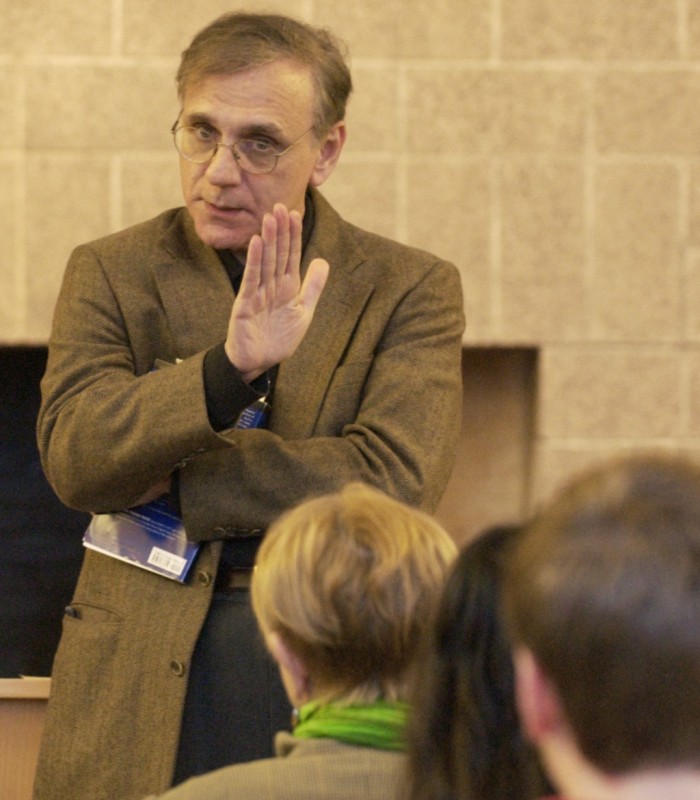 Proto: “I like the landscape and architecture at the University of Washington, the dialogue in Dashiell Hammett’s books, tuna fish sauce, navy blue, and urban running — the peripheral vision required, changing speeds, and moving sideways.”