Thinking and Doing Theatre and Movies

Proto: “Between the age of two and seven we lived with my maternal grandparents. This was the creative side of our family: artists, tailors, wood craftsmen, dancers, food makers, owners of the first generation of record players, film cameras, and projectors (we still have that clunky, magical projector). They also were keen fans of live television, black and white movies, baseball players, and all the related popular personalities. Most lived and worked in New York and came into New Haven with frequency and informality and with the same ease that family members visited New York. That knowledge and skill got shared in many ways generationally, none more engaging than the ‘skit’ — aunts, uncles, and children mixing together to make up stories in a few moments off in a corner, and act them out before family, always intended to be a bit ribald, parodies of life or movies or movie stars or relatives in the room. No scripts, mostly silent, minutes in duration, with lots of facial expression, body movements, ad hoc props, and playing roles without regard to gender.”

Proto: “My sister, Diana, and I began dancing then. My brother Richard and Diana began learning to play the piano. Our home was quiet when the lesson or practicing was in progress. Whatever classical music they learned, at holiday time the popular music — my dad was the singer — was an essential part of setting the celebratory mood.” 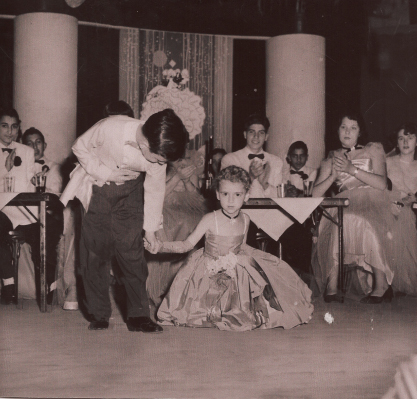 Proto: “The dancing was theatrical. Forming the routine, it’s choreography, practicing, knowing the music, collaborating with each other and our teacher, my mother and uncle designing the clothes, and then performing. Timing, lights, poise, positioning on stage, the occasional mistake and recovery, the audience, and — credit my uncle and father — still having film of some of it.”

Proto: “Publicity was involved and so was dealing with diverse people we often hardly knew, older, seeming to enjoy their experience, a few seeking a career in a way we did not.”

Proto: “There is theatre in the law — the oral argument before three judges, reasoned, persuasive, some portions memorized waiting for a cue or used to set the tone. Positioning behind a podium, facial and hand movement, listening to questions and responding, understanding the dynamics and theatrics among the judges as you do, and the broader societal dynamics in play during the argument, who you’re representing and what that conveys. Using the brief as history and script, your adversary as the antagonist, and the uncertainty, the accidental moment as things unfold to be recognized and exploited if necessary, like recognizing the unpredictable moment retained in a John Ford movie that separates it — like the persuasiveness of your argument — from others.”

Proto: “I met Dan Lauria in 1993, although we had overlapped at Southern Connecticut State University as students. And shared a dear mutual friend in Mike Adanti, then the University’s president. Dan already had done ‘The Wonder Years’ and was a well-known actor, a solid historian intent on bringing historical characters to life, respectful of the past, thoughtfully working with and learning from older actors, Peter Falk, Charlie Durning, Jack Klugman, imaginative in ways that were extraordinary, especially with encouraging new play writers through his Kitchen Ensemble in LA, which my firm organized pro bono. It was through him that I met writers, actors, directors, and producers, visited him in LA to see play readings, plays at a variety of theatre sizes, his rehearsals and interviews, and the bold, confident and respectful way he and others gave new, spirited life to Steve Allen’s ‘Meeting of Minds.’”

Proto: “Attending Dan’s performances on the east coast, like Arthur Miller’s ‘The Price’ and ‘Lombardi’ on Broadway was an incalculable education — seeing the evolution in the writing, the acting, talking to the people doing lighting, sound, handling props, making the process and personalities flow. The choreography and music in ‘A Christmas Story,’ — Dan working with remarkably skilled child actors and complex dancing, acting, and singing arrangements.”

Proto: “Dan guided me through the learning curve of writing a play and movie and has been a thoughtful teacher as I read, with a different intention, play and movie scripts and watched how fiction or historical characters were transformed into theatre and movies. He encouraged me to write a treatment for ‘High Court’ and critiqued it.”

Proto: “When I heard the music from Sacco and Vanzetti I wanted it heard in the United States. Sol Hurok. Okay that’s a little overstated. Though I did go to Belgium, met the composer and writer, and watched a recorded production of the original in Dutch.”

Proto: “I had comfort with music — the lyrics to rock n’ roll, big band sounds, television themes. The generational sharing and era ensured it. When I got to the Sacco and Vanzetti musical drama, ‘The American Dream,’ keeping the music in sequence and rewriting the book and lyrics, I was comfortable doing it in a fairly rushed context, trying collaboratively to give life to a new approach.”

Proto: “The brief course I took at the New York Film Academy in two thousand and seven was part of the education. Wanting to experience the collaborative effort in making a simple movie. Hands on. Conceiving and writing a script, acting and directing it, in this case working with another student, Robert Merisca, and benefiting from the camera skill of another colleague, Jordan. ‘Unblocking Life,’ Robert called it — the screenwriter who couldn’t find an idea and the Roaming Muse — me — intent on giving him one.”

Proto: “I felt like I was in ‘Fame.’ Intense, vivid, me as the relative elder, knowledgeable in my way and disciplined about the schedule, in a setting of dedicated, dream-driven kids with skills I respected and, in their talent, educated me.”

Proto: “Acting for People over Fifty’ — when I was living on Bainbridge Island. Everyone willingly sharing his or her limitations and talents. Being on stage, maybe with a chair. Usually not. Usually just the raw script or your imagination.”